The Best Western Games On PS4 Or Xbox One So Far 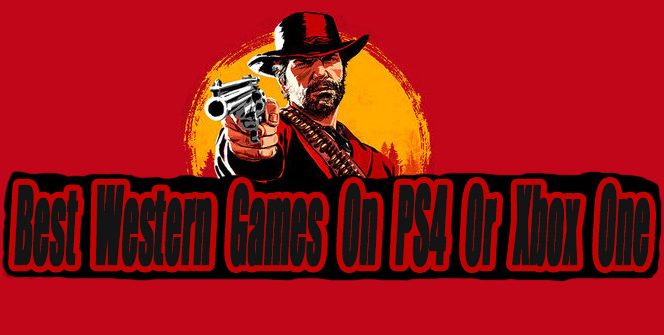 Thanks to the recent release of Red Dead Redemption 2 (RDR2), the demand for western games has picked up. Many gamers who’ve finished RDR2 are looking for other western themed games to play.  When it comes to video games the western genre has never been too populated, especially on game consoles. However, if you’re not too picky about the type of game you’re playing, there is a decent amount of good western games on PS4 and Xbox One.  In this article, I look at the best western games released on PS4 or Xbox One so far. When new worthy games are released this article will be updated! 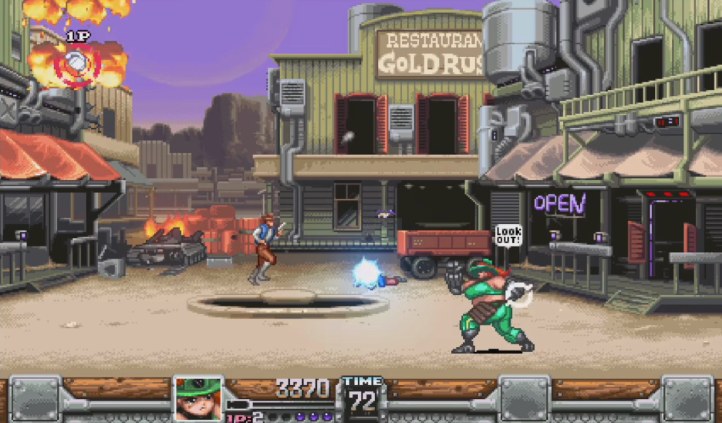 – See It On Amazon
Wild Guns Reloaded (WGR) is a fast-paced arcade-style retro gallery shooter with a wild west theme. Wild Guns originally released on the Super Nintendo in 1995. The expanded Wild Guns “Reloaded” version was released on PS4, PC, and Switch recently, but unfortunately not on Xbox One. There are 4 available characters to play as in WGR. All characters have there own unique look, movements, and guns. In total WGR has 8 stages to play through, with 3 zones in each stage. WGR is most fun when played with 4 players via local couch co-op. The 4 player feature was never available in the original game.

WGR is really short (about 30 minutes long), but it has a good amount of replayability. Overall if you’re itching to play an action-packed score based game with friends, this wild west shooter shouldn’t be missed. 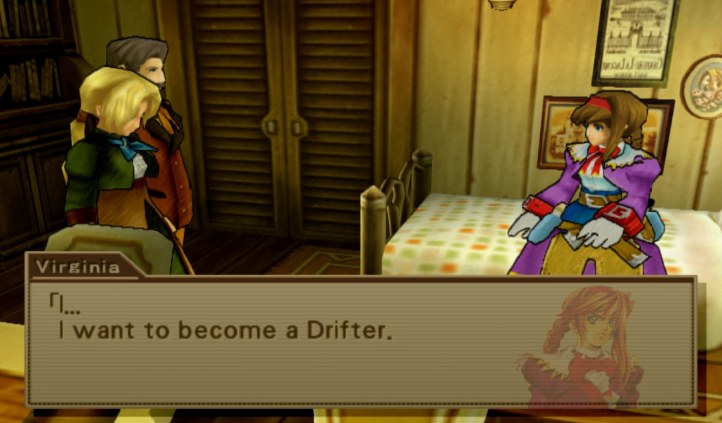 – See It On Playstation Store
Wild Arms 3 is a unique western themed Japanese Role Playing game that originally released exclusively on the PS2 in 2002. Wild Arms 3 was re-released on PS4 in 2016 with 1080p upscaling and trophies. Four very different drifters come together and form a team to explore the vast lands of Filgaia. In Wild Arms 3 you’ll level up your characters, find treasures, gain new magical powers, and defeat threatening enemies. Like most JRPG’s the characters and story play an important role. There’s a lot of game to play here with the main story taking around 40 hours to beat.

Gamers who enjoy turn-based JRPG combat will probably like Wild Arms 3. Wild Arms 3 isn’t the best JRPG out there, but it’s a solid game with an interesting story. 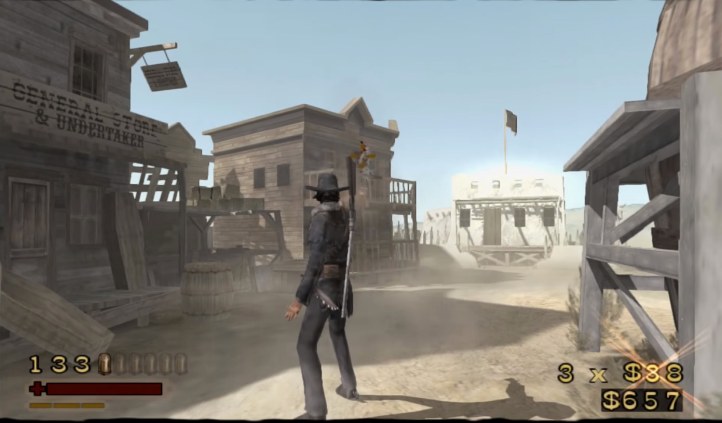 Even though the graphics, gameplay, and tough difficulty level of Red Dead Revolver hasn’t aged well, it’s still a good 3rd person shooter. Just don’t expect it to be as good as newer Red Dead games. 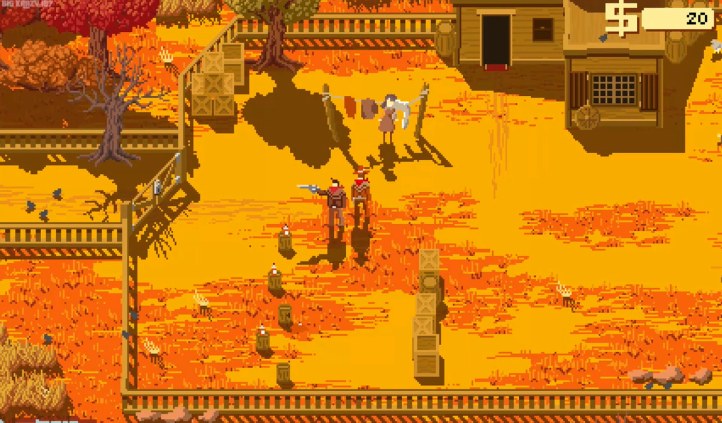 – See It On Microsoft Store
You might want to check out Westerado: Double Barreled (WDB) If you’re looking to play a great story driven indie western game. Don’t let WDB’s old-school 2D graphics turn you off, a lot of time was put into its characters, humor, and choice gameplay. In WDB your main mission is to hunt down the desperado that killed your family. You’ll meet a large variety of different characters throughout your playthrough. Depending on the choices you make will change the story and character interactions later on. Multiple unique playthroughs are possible in WDB, as long as you make different choices each time you play.

Because of WBD’s retro design, the combat gameplay is simple and might not be for everyone. I personally loved WBD’s western soundtrack and art style. WBD is like the much more basic version of Red Dead Redemption with added choice interactions! As long as you can handle slower paced action and retro graphics, Westerado: Double Barreled is worth playing.

3. Call of Juarez Gunslinger & Bound in Blood (BC On Xbox One) 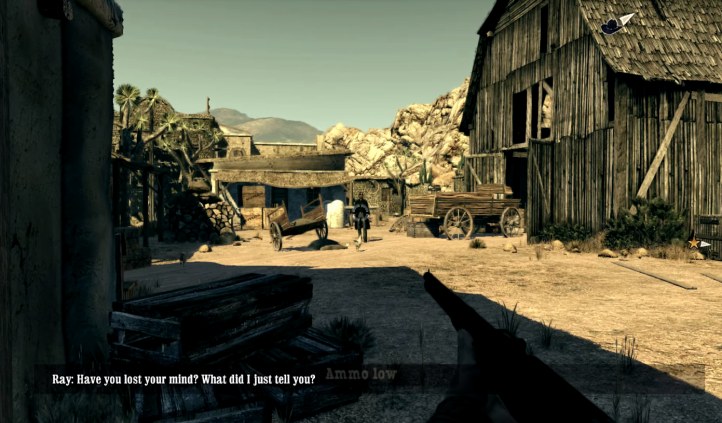 Gunfights against challenging AI enemies and seeking cover will keep you actively immersed in the gameplay. I really like the slow-motion gunslinger mechanics in these games. I slightly prefer Bound In Blood over Gunslinger because it’s a little longer and has neater characters. However, Gunslinger’s has better pacing and more action. Overall if you like first-person shooters you can’t go wrong with either game.

2. Red Dead Redemption (BC On Xbox One) 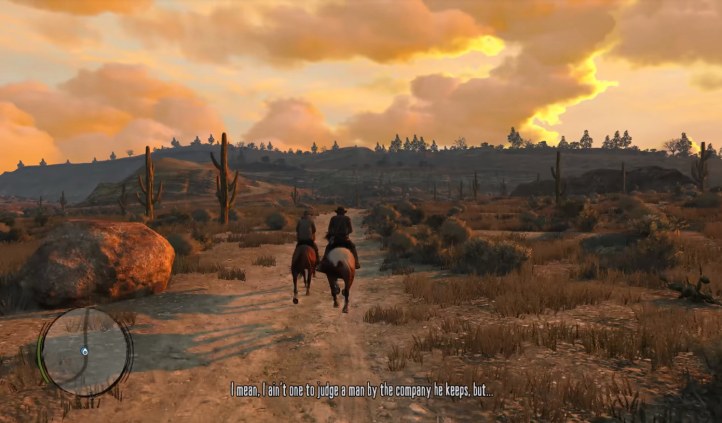 – See It On Amazon
Red Dead Redemption (RDR) is an open world action-adventure game. Rockstar Games studio originally created RDR for Xbox 360 and PS3. RDR was definitely the best western game for those consoles. The Xbox 360 version is backwards compatible on Xbox One. The best way to currently play RDR is on an Xbox One X because you can play it in native 4K resolution with enhanced textures.

Overall Red Dead Redemption is a must play on any available console. If you happen to own an Xbox One X, I highly recommend playing this amazing game at its highest potential in 4K resolution.

A PS4 Alternative For RDR: You can play Red Dead Redemption on PS4 through the $20 a month PlayStation Now subscription streaming service. You won’t actually own the game though. PlayStation Now outputs RDR at its original 720P resolution. 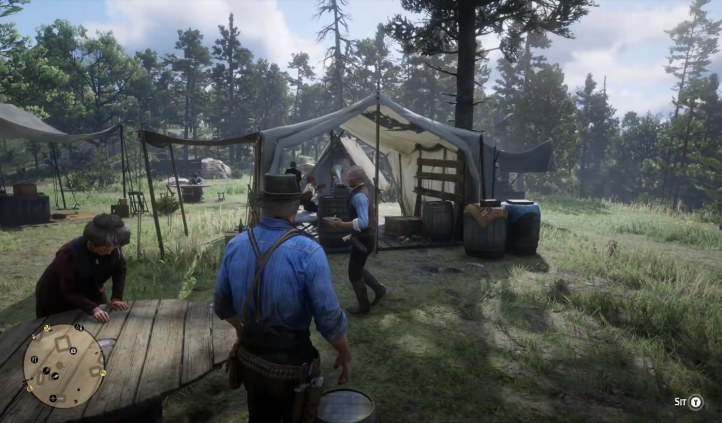 – See It On Amazon: PS4 | Xbox One
The hype is real! Red Dead Redemption 2 (RDR2) is the best western video game so far. Rockstar Games has outdone their selves again by creating one of the best open world games of this gaming generation. Every aspect of RDR2 screams high quality. For me, the thought-provoking story and characters were the highlight of RDR2. Even when I hit slow paced areas of the game, the characters were always intriguing. Keeping me immersed in the game. Another high point of RDR2 are the beautiful graphics and the atmosphere. Traveling through various environments is a sight to see in RDR2. The gun shooting gameplay is good, but I think it could have been better. At times I had a hard time shooting some enemies without aim assist on.

RDR2 is set in the year 1899 and is a prequel to the first Red Dead Redemption game. Throughout RDR2, you’ll play as Arthur Morgan an authoritative member of the Van der Linde gang. After a botched ferry heist, Arthur and fellow gang members are on the run from law enforcement.

Besides the epic main story missions, you can optionally participate in a lot of fun side missions and activities. My personal favorite side activity is fishing because I like to go fishing in real life :). RDR2 does fishing right with realistic fishing gear, a large variety of fish species to catch, and giant legendary fish. It’s kind of funny how the side fishing activity in RDR2 is better than a lot of actual fishing games.

The best way to play RDR 2 is on Xbox One X because it displays in native 4K resolution and has the best frame-rate performance (Digital Foundry analysis video). Second best is PS4 Pro, followed by PS4 and lastly the original Xbox One.

The following games barely missed our ranked top list. These games might be worth checking out also.

Secret Ponchos (PS4 Exclusive) – It was a fun top-down multiplayer shooter when it first released in 2014. Sadly the community is dead. If Secret Ponchos became a PS Plus game it could be revived.

The following PS4 or Xbox One games are somewhat related to the western genre.