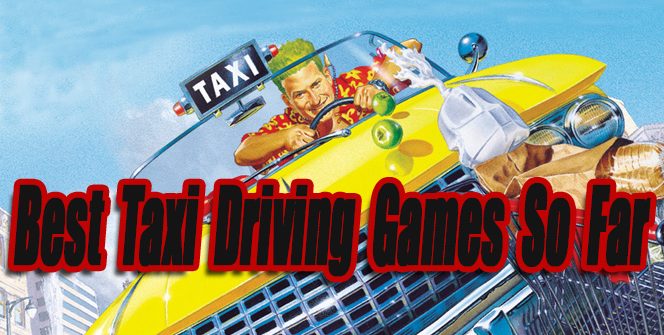 Today I decided to put together a top list featuring the best Taxi driving games released so far. This is a niche genre, that was fairly popular when Crazy Taxi was released in Arcades and on the SEGA Dreamcast console back in 1999. Since then a decent amount of new Taxi games have been released, especially for mobile platforms. I am really hoping SEGA decides to create a new Crazy Taxi game for current generation game consoles. A great Taxi simulator still hasn’t been released, but there is a lot of over the top arcade style games available. I have also included an honorable mentions list at the end of this article. When new games are released, this article will be updated. 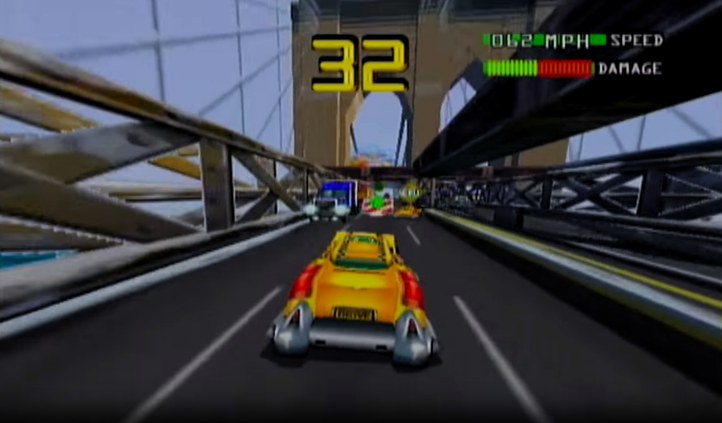 – See It On Amazon
Smashing Drive translated much better as an Arcade game, then a console game. In this game, you drive a futuristic Taxi car and race against another Cab Driver. The goal is to make it to the final destination as fast as you can and beat the other cab driver. There are three stages to play through with set difficulties, plus a bonus stage. Each level is loaded with secret shortcuts and boosts. I remember the arcade game being really fun and challenging. There wasn’t much new content added for the home console versions of Smashing Drive, so once you know all the fastest routes of the three stages, the game becomes repetitive fast. Overall the gameplay is fun, unique, and the music is wacky. If you ever decide to give Smashing Drive a try, just expect it to be slim on content.
– Gameplay Video 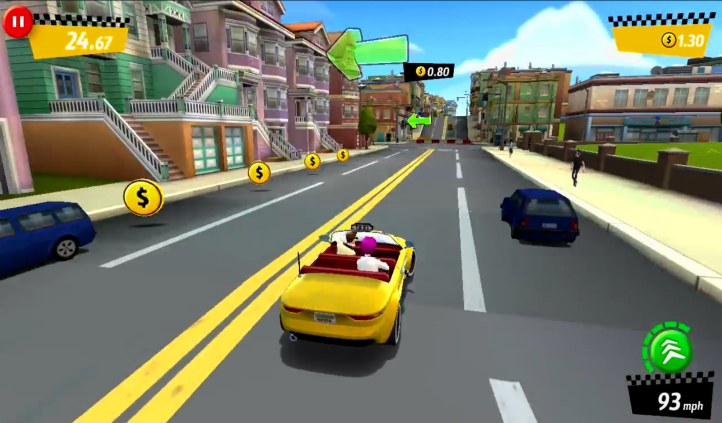 – See It On Market Places: Android | IOS
I was hyped a few years ago when I heard a new free to play Crazy Taxi game made by SEGA would be releasing exclusively on android and IOS devices. Crazy Taxi: City Rush is a good entry in the Crazy Taxi series, but it does have a few problems. Crazy Taxi: City Rush is much more linear than other games in the series. The main menu map provides pedestrian pick up and drop off missions to accomplish. By defeating missions you can earn money to buy new cars, upgrades and cab drivers. When playing the game you can only move forward, turn left, or right, the gameplay is kind of like the popular mobile game Temple Run. The city is vibrant, the characters have personality, and the fast arcade-style gameplay that the Crazy Taxi series known for is here. One of the negatives of the game is running out of gas and having to watch Ads in order to keep playing. It’s annoying, but it’s not a deal breaker. Also, some of the best characters and upgrades are behind a mandatory real money paywall, which feels like a greedy move by SEGA. Overall all this game is a fun mobile version of Crazy Taxi and much of the content can be unlocked for free.
– Gameplay Video 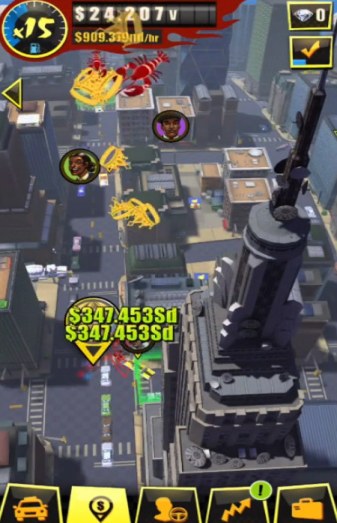 – See It On Market Places: Android | IOS
Crazy Taxi Tycoon (AKA: Crazy Taxi Gazillionaire) is a free to play spin-off game in the Crazy Taxi series. I think this is the first tycoon based taxi game ever made. You start out as a small-time Taxi driver, but your main goal is to expand your business, upgrade equipment, and hire more cab drivers to make more money. If you put enough effort into this game, eventually you will manage your own taxi driving empire. The gameplay at its core is an idle clicker with a lot of choices and upgrades. There are microtransactions, but they don’t feel forced like other mobile games. If you have enough patience to grind, your empire can be grown completely for free. Overall Crazy Taxi Tycoon is highly addictive, and while it’s much different than other Crazy Taxi games it still holds the series charm and personality.
– Gameplay Video 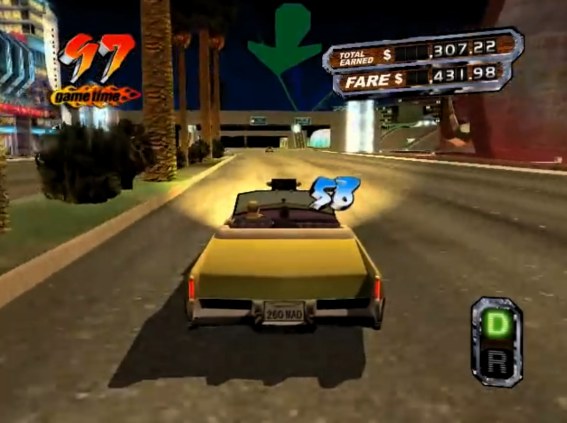 – See It On Amazon
I really love Crazy Taxi 3: High Roller. A part of me wanted to place this game in the #1 spot, but then I had to remember the minor problems this game had. I am going to talk about all the great things Crazy Taxi 3 offers first. Crazy Taxi 3 features two maps (West Coast & Small Apple) from the two previous Crazy Taxi games along with an all-new Las Vegas location known as Glitter Oasis. Your main goal is to pick up as many customers as you can to earn money (for a high score) and keep the timer going. A lot of new & fun challenging Crazy X mini games were also added to Crazy Taxi 3. Crazy Taxi 3’s graphical effects and sharpness are also superior when compared to Crazy 1 & 2 on the Dreamcast. This game is by far the most content filled game in the series and that’s the main reason why I love it so much. Now I am going to discuss the minor issues that I disliked about Crazy Taxi 3. Every map has some clunky framerate issues at times and framerate is especially bad in the newly added Glitter Oasis map. The gameplay also feels slightly slower or less responsive compared to the first two Dreamcast games, it’s not a big deal though. SEGA also changed the names of all known retail places from the first 2 games. For example, Pizza Hut, KFC, FILA, and Tower Records were changed to generic names. I am happy this game still has the original soundtrack which includes bands like The Offspring and Bad religion, along with a few new ones. Overall Crazy Taxi 3 is a must play taxi game if you’re a fan of the series or interested in the genre.
– Gameplay Video 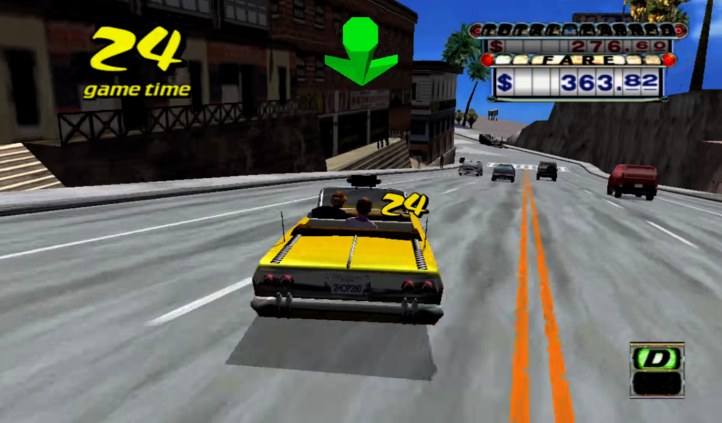 – See It On Amazon
I couldn’t decide if I liked Crazy Taxi 1 or 2 better so I placed them together in the #1 spot. The first Crazy Taxi game has been ported to many different gaming platforms, while Crazy Taxi 2 is a SEGA Dreamcast exclusive. Both games have different locations and characters to choose from. In both games, I personally like the characters and locations (CT: West Coast, San Francisco. CT2: Small Apple: New York) about equally, but most gamers prefer part 2 for some reason? Part 2 does have a nicer looking interface, cooler looking taxi cars, and it did introduce the awesome “Crazy Hop” move. Both games share the same goal, pick up as many customers as you can and drop them off at there requested locations as fast as you can to earn money and to extend the play clock time. When time runs out your high score will be posted to the leader-board. The best versions of the original Crazy Taxi game is the Arcade and Dreamcast versions, because they had the best gameplay performance, they include all original soundtracks and original retail store names. Other versions have those inclusions striped from them and worst performance. The PS2 and Gamecube versions are by far the worst ports, PS2 is especially bad with consistent Skippy frame rate. PS3 and Xbox 360 versions have achievements/Trophies, smooth gameplay, and HD visuals which is nice. On Android and IOS, Crazy taxi is known as “Crazy Taxi Classic”, these are decent mobile ports. There is also a good mash-up game of the first two games on the PSP called Crazy Taxi: Fare Wars. Overall Crazy Taxi 1 & 2 are the best Taxi games available and are must plays if you’re interested in the genre.
– Gameplay Video

The following games either barely missed our top list or are loosely related to the taxi genre.

Grand Theft Auto 5 Become a Cab Driver – In GTA5 you can become a cab driver by calling a cab, then stealing the taxi car (See How in this video). When you are a cab driver you can pick up and drop off pedestrians at requested locations for some extra cash.

Taxi! (PC) – A Taxi simulator that has bland graphics and a lot of glitches/bugs. If you can look past the technical issues, this is a decently fun simulator to play in short sessions. The missions do become repetitive after a while.
Loop Taxi (Android, IOS) – A fun score based taxi game where you pick up customers and drive them to the safe area while dodging dangerous oncoming traffic. If you like score based games, Loop Taxi can become quite addicting.

Google Play Store Taxi Games (Android) – Google Play has a landfill full of generic taxi games. I downloaded and played a few popular games like “Taxi Game 2”, “Taxi Sim 2016” and “Taxi Driver 3D”. I thought they were all boring, with almost no street traffic, slow paced, and full of in-game advertisements. Taxi simulator fans or young kids might like these games though. I suppose if you look hard enough on Google Play you might find a few good taxi games mixed in with the junk.