Best MMORPGs On PS4 Or Xbox One So Far 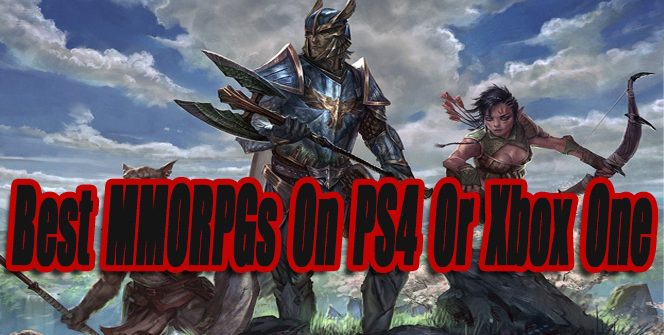 There have only been a few MMORPGs (Massively multiplayer online role-playing games) released on PS4 or Xbox One. However, most of the titles released have been decent to great. Since it’s late in the current gaming generation, I thought it was the perfect time to create a top list featuring the best MMORPG’s released on PS4 or Xbox One so far. In this article, I have also included an honorable mentions list, anticipated games coming soon list, and games similar to MMORPG’s list. When new worthy games are released, this article will be updated. 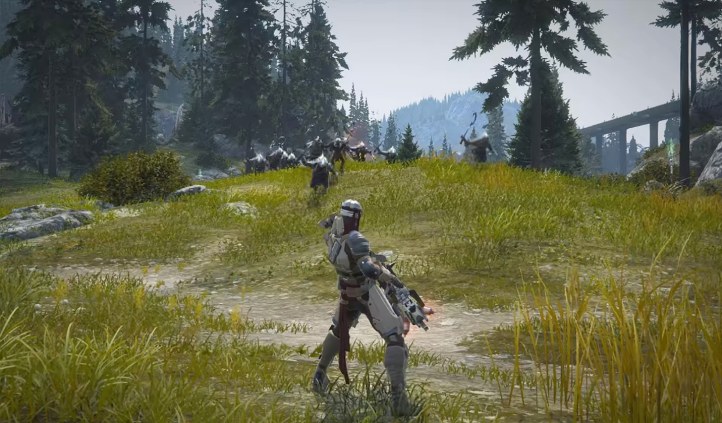 – See It On Marketplaces: PS4 | Xbox One
Skyforge feels like it’s borderline Pay 2 Win if you are not willing to wait on the game. The pay to progress and premium rewards might annoy you. If you plan on playing Skyforge for free, you better have a lot of patience and be prepared to ignore all the monetization methods in place. The amount of level grinding can feel horrible at times, but I know some players don’t mind grinding. The PvP (Player vs Player) system is also almost dead because it’s unbalanced and not very fun. On the positive side of things, Skyforge has nice looking graphics, a fantastic sci-fi atmosphere, varied missions with depth, and a decent backstory. If you can play Skyforge casually with patience or if you don’t mind paying some money in, you might enjoy it! Besides the grinding and attempted paywalls, it’s a decent MMORPG.
– Gameplay Video 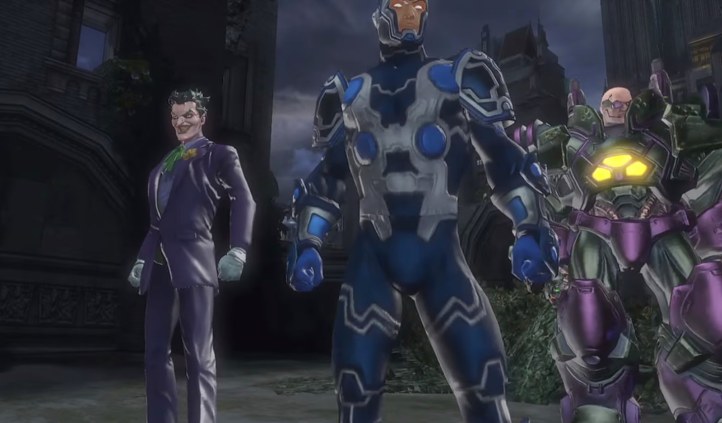 – See It On Marketplaces: PS4 | Xbox One
DC Universe Online is one of the oldest games on this list. DC Universe Online was first released on the PS3 and PC in 2011 and was later ported to PS4 in 2013 and Xbox One in 2016. You can see DC Universe’s old age in its graphics and gameplay when compared to newer MMORPGs. DC Universe is still very active on both PS4 and Xbox One. You can create your own inspired superhero or villain characters. In DC Universe The main object of the game is grinding for experience and gaining new superhero loot for upgrades. When starting the game your hero/villain will be weak, but after you play enough, you will become a force to be reckoned with. There are some memorable missions that feature popular superheroes and villains, but side quests are loaded with destroy enemies and fetch quests. PvP (Player vs. Player) can be unlocked at level 10, in case you feel like battling against other online players. You can pay real money to earn in-game content faster, like experience, loot, or characters. Overall if you’re a fan of DC Superheroes and don’t mind outdated graphics, DC Universe is still worth playing in 2018.
– Gameplay Video 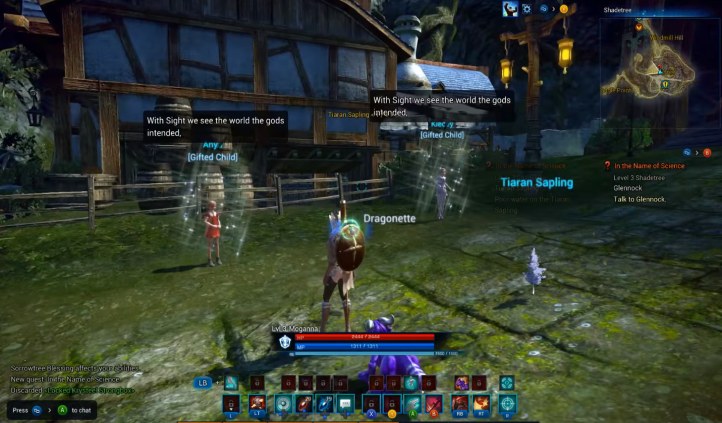 – See It On Marketplaces: PS4 | Xbox One
TERA has some of the coolest looking female characters I have seen in an MMORPG. TERA’s real-time battle system is great. The combat is really smooth and the physical/magic attacks are engaging. TERA is easy to pick up and learn and it feels like a nice fit for game consoles. The missions are varied well but are mostly focused on standard MMO fight & grind. TERA starts off easy, but as you reach higher levels the difficulty ramps up a lot. When the difficulty rises you either have to have patience and continue the grind, study your character class and make necessary changes, or pay in real money for elite status (Double Gold) or EMP (In-game currency). I think TERA’s monetization strategy is fair enough, and about average for a free to play MMORPG. The character and enemy design graphics look nice, but the world is a little bland compared to other MMORPG’s. Overall TERA has a lot to offer. The real-time battle system, story, and it’s female character designs is what stood out to me most. 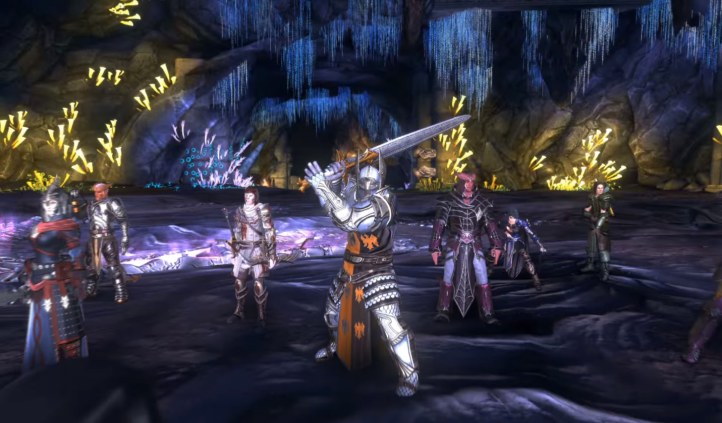 – See It On Marketplaces: PS4 | Xbox One
Neverwinter is another older game on this list with outdated graphics and gameplay. However, Neverwinter’s combat animations and atmosphere have held up nicely. I also love the PvP system in Neverwinter, it’s fair for new and veteran players. Neverwinter offers plenty of varied raids and ongoing guild events to keep your time occupied when you don’t feel like completing the basic missions or tasks. The amount of strategic combat build possibilities is enormous in Neverwinter. Customizing your character can be almost as addicting as the actual game. There is still a lot of bugs in this game, so expect to see some here and there. Some grinding can feel a little brutal at times, especially for higher level players. Paid content can help you level up and gain items much faster, but this game can be played entirely for free all the way through. If you are looking for a game that feels similar to World Of Warcraft or other classic MMORPG’s, Neverwinter is highly recommended. Neverwinter is my top “free to play” MMORPG featured in this article.
– Gameplay Video 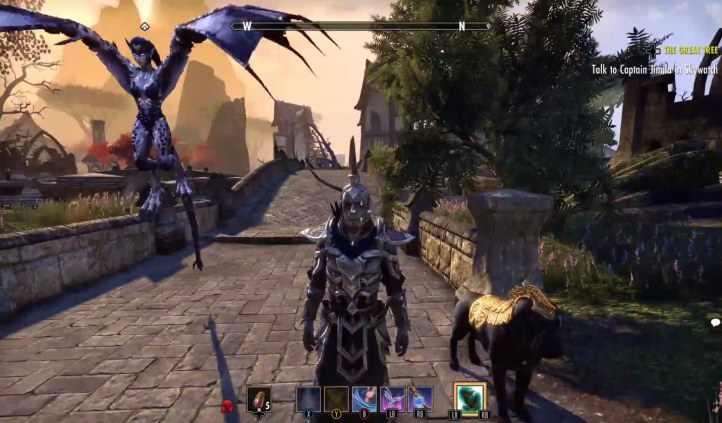 – See It On Amazon: PS4 | Xbox One
Elder Scrolls Online (ESO) is not free to play, but I think that’s a good thing. To get started you will need an active PS Plus Membership on PS4 or an Xbox One Live Membership on Xbox One. You will also need a copy of Elder scrolls online, includes Morrowind Expansion. Elder scrolls online: Tamriel Unlimited is usually priced at under $12 (Free with Game Pass on Xbox One) so getting started is fairly easy. There is no required Monthly fee, so ESO is very attractive considering how much higher quality it is compared to available Free To Play MMORPGs. ESO is great in about every area of what makes MMORPGs good. For starters, ESO focuses more on the quality action-packed missions, characters, impressive skill lines & armor upgrades, solid combat gameplay, and a neat story. ESO does not play like a traditional PC MMORPG, it feels more current and it feels like it was built with game consoles in mind. Overall I can confidently say ESO is better than any free to play MMORPG available on PS4 or Xbox One in just about every way. If you are a fan of the Elder Scrolls series and enjoy MMO games, it’s a no-brainer, you have to check out ESO.
– Gameplay Video 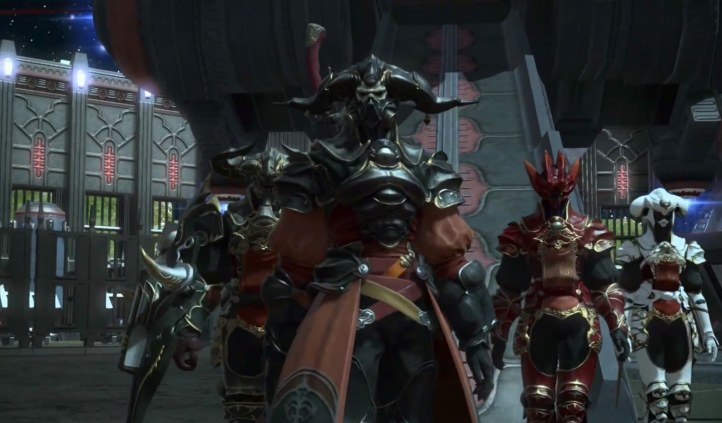 – See It On Playstation Marketplace
Final Fantasy XIV Online (FFXIVO) is the best MMORPG available on the PS4, but there is an extra cost for being the best. FFXIVO costs a one time fee of $20 for the starter pack which includes FINAL FANTASY XIV: A Realm Reborn and a 30-day free play period. After the free 30-day play period is up, a monthly subscription is required (About $13 a month). So before entering into the FFXIVO world, you have to ask yourself if you’re willing to become invested in a Final Fantasy themed MMORPG that costs $13 a month. If you’re willing to pay the price and if you’re committed to playing FFXIVO, you probably won’t be disappointed. What sets FFXIVO apart from other MMORPG’s is it focuses on quality main story quests. There is a massive amount of varied, fun, and challenging quests to play through. The quests are done so well, it’s hard to get bored of them. Dungeons are also high quality and span across all regions. The combat gameplay is fun alone or with a party, and is PVE (Player versus environment) focused. You have the ability to use 1 character and switch to different classes. FFXIVO soundtrack is brilliant and the graphics engine used is gorgeous even in 2018. Lastly, the majority of FFXIVO’s community is very helpful, friendly, and easy to get along with compared to other MMO’s. Overall if you’re willing to pay a monthly fee for a console MMORPG, FFXIVO is the best choice.
– Gameplay Video

The following games either barely missed our top list or are targeted more towards niche audiences.

Trove (Free To Play) PS4 | Xbox One – When Minecraft and a action packed MMORPG have a baby, you get Trove. I played Trove for a little while. I thought the building mechanics and the combat were solid, I could not get into this game though. Trove felt too kiddy to me and the player base seems to be filled with a lot of young kids. If you love Minecraft and are looking for a starter MMORPG, Trove might be a good option.

Onigiri (Free To Play) PS4 | Xbox One – Onigiri is very anime focused with its characters and art style. It’s probably the closest game we will see to Phantasy Star Online 2 in North America or Europe. Onigiri’s graphics/frame rate performance was so horrible that I gave up on it after a few hours of play, so I can’t really give a valid opinion. It’s been about a year since I played Onigiri. Maybe it’s better now?

I am hoping some big updates come out, and Black Desert turns out to be an amazing MMORPG on Xbox One.

* Good Games Similar To MMORPG’s On PS4 or Xbox One *

The following online games are not MMORPGs, however, they do share some similarities. You might want to check these games out also.

Destiny 2 – A fun cooperative online first person shooter. Go on Quests with friends in an open world full of enemies. Level up, create and upgrade weapons.
Sea of thieves (Xbox One Exclusive) – It’s a pirates life in Sea Of Thieves (SOT). SOT can be fun for at least a short period of time if you have friends to go on voyages and explore with. When SOT was first released the content was pretty thin, however, new free expansions continue to be released adding new experiences to the game.
Warframe (Free To Play) – Warframe is a space ninja themed third-person shooter MMO game. I played Warframe when it was first released on PS4. I was addicted to it for about 6 months before I became bored of it. It’s a fair free to play game, that revolves around completing cooperative missions, powering up and building weapons, and unlocking new warframes (characters) via blueprints you collect.
PlanetSide 2 (PS4 Exclusive) (Free To Play) – An MMO first-person shooter. I never really liked Planetside 2, but I know some people that love this game.