10 Best LEGO Games On PS4 Or Xbox One So Far 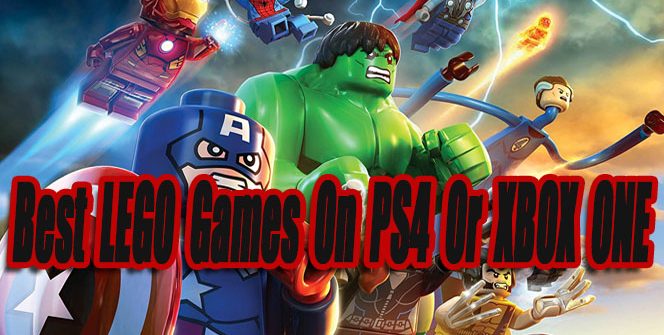 Now that PS4 and Xbox One have a nice collection Of LEGO Games, I thought it was a good time to rank the top 10 best. Luckily there hasn’t been any horrible LEGO games released for either video game console so far, all titles are at least decent to great. Any of the games listed below can be great choices for kids, depending on their preferences. If you’re an adult looking to play a good LEGO game, you’re going to have to be a little more picky, because not all LEGO games are created equal when it comes to gameplay, story, difficulty, characters, and puzzles. That’s where this top list hopefully helps the most.

See It On Amazon: PS4 | Xbox One
If you have a child that loved the LEGO movie, this game is a pretty good complement to it. It’s fun and easy to play, perfect for younger kids. The game feels much less interactive and bit more boring at times compared to other LEGO games though. The biggest problem is the pacing, it feels off at times. Some areas are a blast to play through, while other areas feel like a drag. Overall it’s about an average LEGO game, nothing spectacular, but still fun at times.

See It On Amazon: PS4 | Xbox One
Explore randomly generated free-roaming worlds where you can create almost anything you want out of LEGO bricks. Well kind of, once you get deep in creative mode you will find out it’s not so easy to create things after all. I thought the tools were hard to use and the camera view can be annoying at times, which can lead to frustration. I suppose if you have tons of patience and become used to the tools provided in creative mode you can have some fun in the long run. Seems like the perfect idea! LEGO building in a Minecraft type world, too bad the execution was not very good. Overall it’s still a decent title, that’s different than any other Lego game. If you want to build things creatively, I would recommend Minecraft or Dragon Quest Builders instead of LEGO Worlds.

See It On Amazon: PS4 | Xbox One
LEGO Marvel’s Avengers is a fun experience if you love Marvel characters and Co-Op play. The Co-Op combo moves are really cool to look at and do. The level design and setting stay true to the Marvel Universe, while puzzles feel a bit basic, but they are not bad at all. The worst part about Marvel’s Avenger is the bad story and lack of verbal dialog. It’s not a deal breaker but makes the game feel a bit rushed and less exciting.

See It On Amazon: PS4
A collection of LEGO Harry Potter games from the PS3 and XBOX 360 era. All have been remastered in 1080p, with better texture resolution and all the original download content is included. It’s a great value for any Harry Potter or LEGO fan. The games included are pretty good, a bit outdated, but they offer many hours of gameplay. Not sure why this wasn’t ported to Xbox One also? Hopefully, sooner or later it will appear on Switch and Xbox One for Harry Potter fans. I would love to see a LEGO Indiana Jones collection eventually also :).

See It On Amazon: PS4 | Xbox One
LEGO Jurassic World is based on all the Jurassic Park/World movies put together. You will encounter familiar scenes from the movies pretty often. The story is played out very well and is entertaining, especially if you are a fan of the Jurassic movies. Compared to other LEGO games it is a little less open and can feel constrained at times. That does not necessarily take away from the experience though. This game is fun, and the LEGO dinosaurs make it even more fun. Playing as Dinosaurs is a great addition, and encountering them is nerve-racking at times. Overall it’s a great one to play alone or even better in couch Co-Op with friends.

See It On Amazon: PS4 | Xbox One
First and foremost this is a Batman LEGO game but also features many characters from the DC Universe such as Superman, Wonder Woman, Flash and more. The characters fit into the story nicely and are very charming most of the time. Some of the voice acting and dialog lines can be odd at times, but it’s still alright. The suits for Batman are so cool and fun to use. My personal favorite is the electricity suit, how it looks and electrifies enemies is very satisfying. Gotham city’s level design is captured nicely, with many surprises and challenges along the way. A great addition to the LEGO Batman series.

See It On Amazon: PS4 | Xbox One
LEGO City Undercover (AKA: Grand Theft LEGO) is the Kid friendly LEGO GTA style game. It’s an open world LEGO game where you can drive cars, boats, helicopters, planes and take down bad guys. Play as an undercover cop who must investigate and take down an escaped convict named Rex Fury. Many of the missions include well-crafted puzzles, taking people to locations, fighting bad guys and high-speed chases. Secret uniforms and collectibles are all very useful and helpful for unlocking new items in this world. If you don’t want to do missions you can always go free roaming, and a Co-Op friend can pop in and out in at any time. Overall it’s not perfect with some technical issues and some muddy graphics, because it’s a port from the Wii U video game console, but it’s different than most other LEGO games and still a blast to play.

See It On Amazon: PS4 | Xbox One
This game is great all around. I thought it captured the Star Wars Universe wonderfully in every way. The characters, puzzles, humorous story, flying areas and everything else is very charming and super fun. I would have to say out of all the LEGO games, I probably enjoyed these puzzles the most because it seems the developers tried a lot of new puzzle mechanics that ended up working out well. This journey is full of content and will likely have you playing for a while if you are trying to unlock all of its secrets. If you are just playing through without exploring, it can be a bit on the short side, but it’s still an amazing experience.

See It On Amazon: PS4 | Xbox One
If you are a hardcore LEGO fan that only wanted to buy one LEGO game, LEGO Dimensions probably should be that game. It features so much content and is executed very well. The mash-up of characters, different themed levels and story are so neat and I absolutely loved it. Some of the random playable characters offered here include Batman, Scooby Doo, Wizard Of OZ, Adventure Time, Sonic The Hedgehog, The Simpsons, Ninjago, Lord Of The Rings and many more. It’s a blast playing with friends in Co-Op. Very kid friendly levels here, however, adults will enjoy them also. My personal favorite level is The Simpsons world. The cool and maybe not so cool thing about Dimensions is the physical toy Portal and characters. To unlock playable characters in the game you must place a physical LEGO toy on the portal, so they appear in the game (It’s like Skylanders, but with LEGOs). You will likely have to invest in LEGO Worlds once your kids realize how important and fun the toy characters are. Overall this is a great game, but the high price might not be justified.

See It On Amazon: PS4 | Xbox One
An open world LEGO Marvel game executed almost perfectly in every way. Seriously this is probably the best Marvel game ever created. The unlockable character roster is huge! Many Characters from Marvel, X-Men, The Fantastic Four and more can be found here. The best thing about the characters is a unique power moves each hold. My personal favorite is Spiderman because he can web glide around the city. The missions are linear but very engaging, because the story and villains tie well into the gameplay, making for a high quality, I can’t put down the controller type of experience. If you become tired of the main missions (I doubt it) you can always explore the open world of Manhattan. In Manhattan, you can free roam or complete various side quests. Overall this game screams quality all around, it is jam-packed full of content and is so much fun to play alone or Co-Op with a friend. It’s an older game, so the price is fairly cheap now. Even if you don’t like LEGO that much, but you like Marvel, you will probably still love this game. A must have over any other LEGO games on PS4 or Xbox One so far.

* Final Thoughts *
This top list will likely be updated once LEGO Marvel Super Heroes 2 is released on November 14th, 2017. If you have any questions about the games listed above or this article, please comment below. I will try to respond as fast as I can :D.