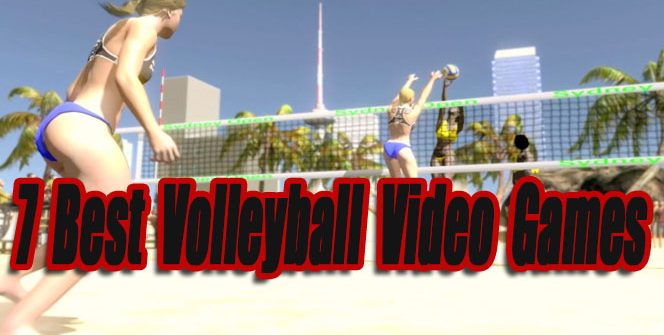 In the last 40 years, there has been over 70 Volleyball video games released for Arcades and consoles. Most of the games released, however, have been below average and of bad quality. I have compiled an updated list of the best Volleyball video games worth playing. These games are ranked based on fun factor, quality or realism. Volleyball is not the most popular sport and does not have the most robust library of games, it deserves a proper top list though. I hope this article helps anyone looking to play a great volleyball game. 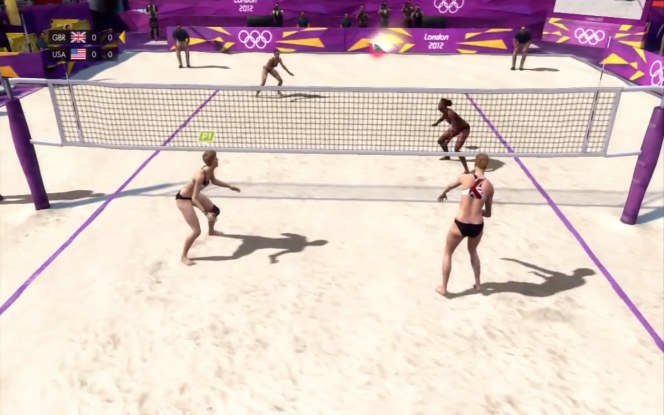 – See It On Amazon
London 2012 Olympics has about 11 different Olympic game events in it. Most of the Olympic events are pretty boring, however, the women’s Beach Volleyball was pretty good. If you are looking for a decent simulation experience geared towards professional Volleyball, London 2012 does the job pretty well. The announcer and realistic gameplay, are two of its biggest strong points. It’s very limited though. Women only and only one Volleyball stadium available to play on. So it ends up feeling like a demo because there is not enough depth and content here. If this was a full-fledged Volleyball only game, it could have been amazing, instead of just pretty good. 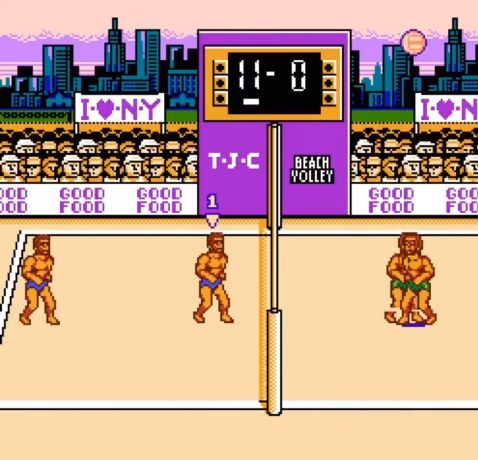 – See It On Amazon
As far as retro Volleyball games go from the 80’s and 90’s, Super Spike V’Ball for the classic NES was the best. Playing with friends Up to 4 players (Via the NES Four Score) was a blast to play. The single player campaign was also pretty fun. Playing in Volleyball tournaments across America and trying to become the top team is challenging, but possible.  Spiking across the net with fast reflexes can be very addicting, especially when matches become challenging with a lot of back and forth action. The music and graphics are also great compared to other volleyball games that came out on NES. 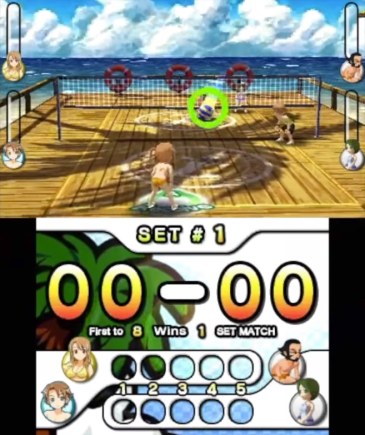 – See It On Nintendo Store
Super Strike Beach Volleyball is only available as a digital download on the Nintendo 3DS. It’s probably the best handheld Volleyball game ever made. It’s not a simulation, Super Strike plays more like a fast-paced arcade game, where fast movements and spikes matter most. It features 8 cute characters to choose from, 8 courses to play at, 3 different gameplay modes, costumes to earn an RPG style character stats. It has a lot of depth overall. When looking at the complete package, along with the addicting gameplay, this Volleyball game is one to look into if you own a 3DS.
– Gameplay Video 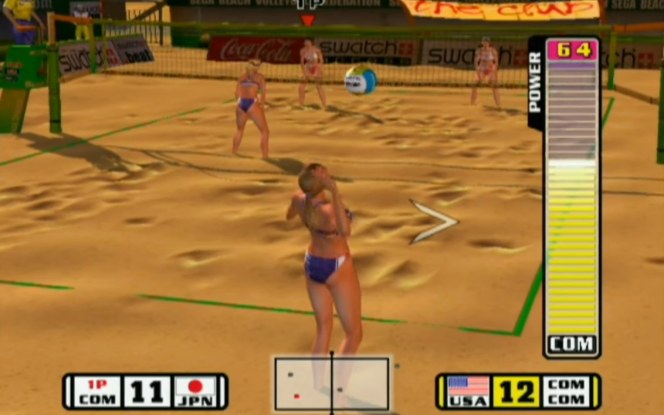 – See It On Amazon
SEGA’s first stab at a 3D Volleyball game. I really expected them to name this one Virtua Volleyball instead it was named Beach Spikers. It was a console Nintendo Gamecube exclusive that was supposed to rival Dead or Alive Beach Volleyball on the original Xbox at the time. Graphically the ladies don’t compare to DOA, but at the same time, they look more professional in Beach Spikers. It was a great Beach Volleyball game but had some problems also. What’s great about beach Spikers the most is the ability to play with 4 friends locally (2 vs 2). The gameplay is so engaging and addicting, people you’re playing with will have a lot of fun once they get the hang of the terrible controls and hyperactive camera angles. Yes, those are two of Beach Spikers largest problems, the controls are not too friendly and the camera might give you a headache after a while with its quick in and outs. Overall Beach Spikers is a solid Volleyball experience playing alone, with a lot to offer in the campaign mode, but you will probably have much more fun playing with friends. 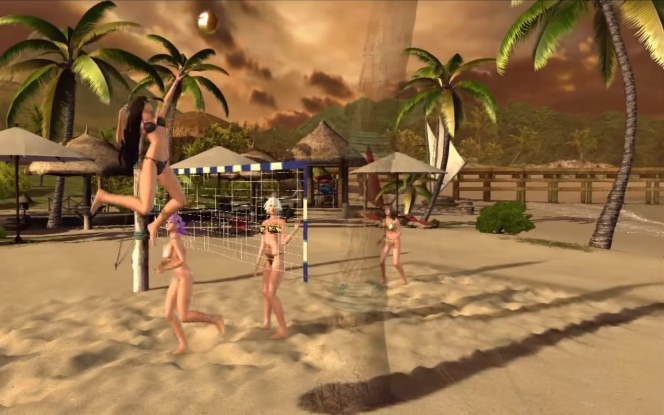 – See It On Amazon
There are 3 different Dead Or Alive (DOA) Volleyball Style Games. Dead Or Alive Beach Volleyball on the original Xbox was the first in the series and featured Volleyball and a mini jumping game, it was pretty good but the graphics and gameplay were lacking a bit. DOA Xtreme 3 is the newest game in the series, available on the PlayStation 4 via import. It has the best graphics, it also has useless perverted mini-games lol and the Volleyball gameplay doesn’t feel as solid as DOA Xtreme 2. Last but not least DOA Xtreme 2 is my favorite in the series, available for the Xbox 360 it has great graphics along with improved Volleyball gameplay compared to the other entries. This series is known for its beautiful voluptuous woman and its unlockable skimpy costumes. If you are looking for a great Volleyball experience, go with the first or second game in the series, I prefer the second!
– Gameplay Video 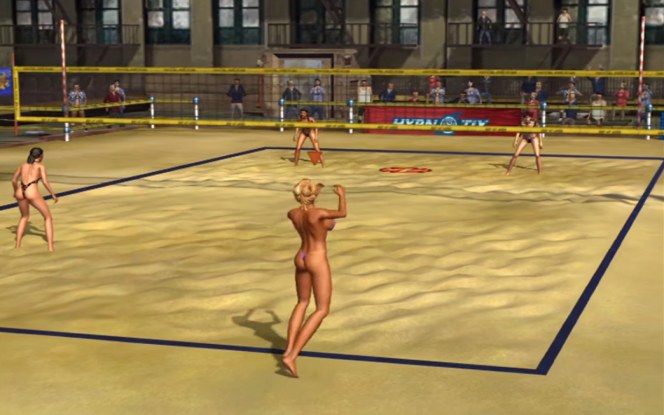 – See It On Amazon
A lot of gamers that have never played Outlaw Volleyball will be shocked it made it this high on the list. It’s hard to look past some of the antics in this game lol. A lot of gamers prejudged this game because of its crazy outspoken characters. It’s like trailer park trash and porn stars decided to play volleyball for no good reason! It’s hilarious, not to be taken too serious though, it’s a goofy game. Once you look past all the crazy characters, Outlaw Volleyball is a great Volleyball game. The gameplay reminds me of NBA Jam, with Fire spikes, super high jumps, flips and tons of fast action. This game is also packed with content. Choose from a large roster of characters and locations to play at. It’s a blast to play alone or with friends locally. The gameplay is just plain fun, controls work well also, it’s probably the best arcade-style Volleyball game ever made.
– Gameplay Video 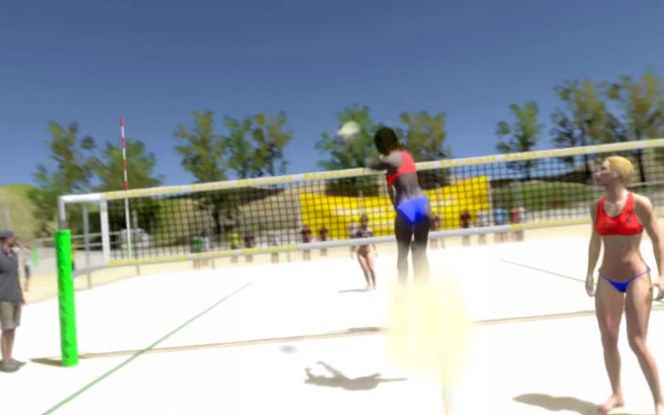 – See It On Steam
Volleyball Unbound is actually still in beta (early Access) on steam. It’s already the best simulation Beach Volleyball game ever made. With a large career mode and the ability to select from Male and female characters (Usually these Volleyball sims offer female characters only). The AI and ball physics are outstanding, along with the variety of locations to play at. Volleyball Unbound even has a character creation mode, it’s pretty decent. The graphics are not perfect, but they still look great compared to aging titles. The game is fun playing alone through the career or with 4 friends locally. The controls are great as long as you are using a gamepad. The mouse and keyboard controls don’t work too well. If you are looking for a realistic casual beach Volleyball experience, Volleyball Unbound is the only game you should be playing. If you are looking for something less serious and more arcadey go with Dead or Alive Volleyball or Outlaw Volleyball.
– Gameplay Video

The volleyball games listed below barely missed our top list. They are worthy enough to be listed as honorable mentions.

Mario Sports Mix (Nintendo Wii) – I was about to add Mario Sports Mix to the #7 spot. The Volleyball in it is fun but limited. The Mario characters and power-ups are a blast to play, especially with friends. There just isn’t enough Volleyball here though.
Klonoa Beach Volleyball (PS1, Europe & Japan only) – A pretty good Volleyball arcade game, with Klonoa characters. It’s The best Volleyball game on the PS1.
Mario & Sonic at the Olympic Games, London, Rio (Wii, WiiU) – Mario/Sonic Olympic games has a very basic Volleyball gameplay. Because it’s limited, it becomes boring fast. It might be fun for kids though.
Summer Heat Beach Volleyball (PS2) – A generic knockoff of Xbox’s DOA Volleyball game. It’s pretty good I guess. Not as good as DOA though, DOA is better in every way :D.
Super Volleyball (Sega Genesis) – Back in the day a lot of Genesis players used to say Super Volleyball was better than Super Spike V’Ball. I thought Super Volleyball was ok for its time, but it’s far too slow and a bit boring compared to Super Spike V’Ball and its exciting gameplay.