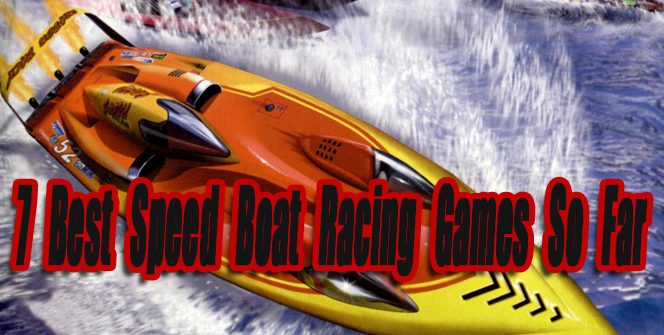 Throughout the years there has been a decent amount of good speedboat racing games released for game consoles and arcades. Most gamers have not experienced this niche racing genre. Many of these games are memorable because they are packed with over exaggerated speed, jumps, boosts and insane track designs. This list covers the 7 best speed boat racing games released so far, along with honorable mentions. When new worthy games are released, this article will be updated.

7. Cobra Triangle (NES or Xbox One) 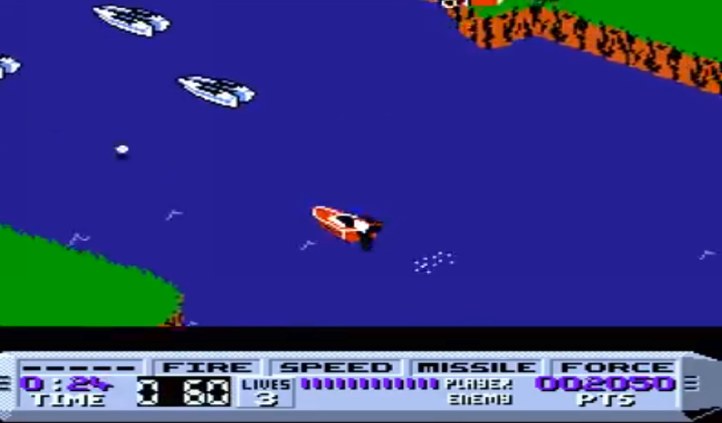 – See It On Amazon: NES | Xbox One
Cobra Triangle is a classic speedboat racing game that was first released on the Nintendo Entertainment System in 1989. Recently it was re-released on the Xbox One as part of the Rare Replay collection. What I loved most about Cobra Triangle is the variety of gameplay it offers from mission to mission. In some stages, you will race against other boats, while others you will be collecting pods, destroying mines, dodging obstacles, protecting swimmers or fighting bosses. Your speedboat is armed with powerful guns, useful against enemy boats and bosses. Cobra Triangle is an older game, but because of its unique gameplay and varied levels it will never be forgotten (At least by me :D).
– Gameplay Video 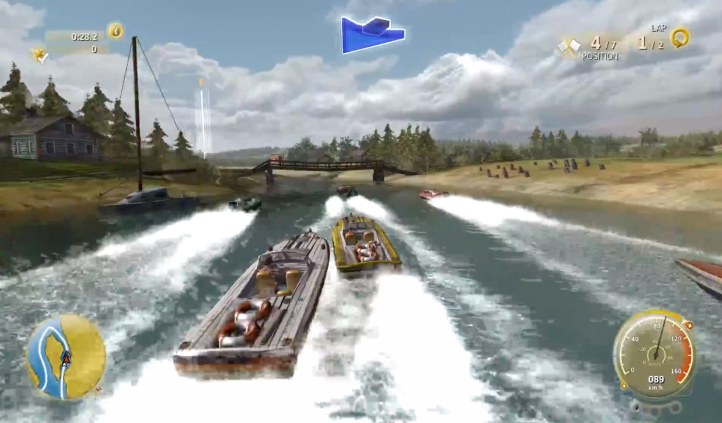 – See It On Steam
Aquadelic GT is impressive considering it’s an indie developed budget title, and available for only $5 on Steam. You can tell by the games polish, that the developers wanted to make Aquadelic GT as good as possible, even with the limited budget they had to work with. The boat physics are very good and the racing is both fun and challenging. If you happen to get tired of racing, you can always explore each area. Looking for treasure, driving people to certain destinations, and completing various side missions are great ways to earn extra money. Money can be used to buy boat upgrades (aesthetic & speed). In the career mode, you will race against other boats for cash prizes, on tracks from around the world. Graphically Aquadelic GT is detailed well and looks nice for an indie title. In general, the game does lack levels, content, and quality when compared to big budget titles. It’s not a phenomenal game, but it’s good and Well worth the $5 admission!
– Gameplay Video 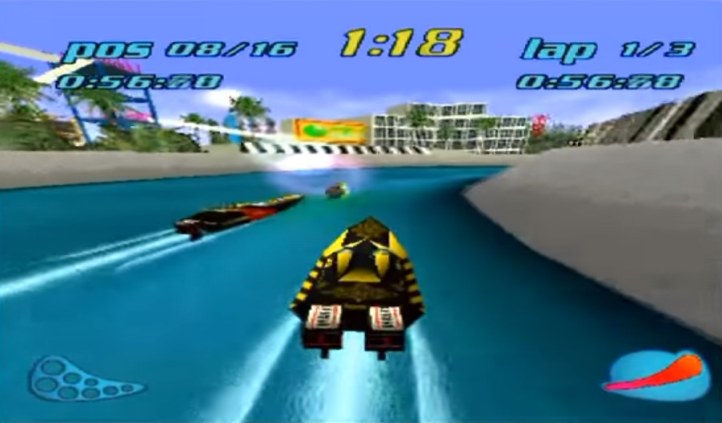 – See It On Amazon
Rapid Racer is the best boat racing game available on the original PlayStation. Rapid Racer’s gameplay and tracks reminded me of a popular futuristic racer on the PS1 known as WipeOut. What I like most about Rapid Racer is the tracks, music, and challenging gameplay. Each track has a day and night time counterpart. The night tracks are more challenging than the day tracks. With points earned from races, you can buy upgrades (handling, speed, turbo) for your selected boats. Upgrades are a necessity for harder night tracks. Even though this game is hard, I always came back for more. It’s one of those games that will likely beat you up a lot, but because it’s so addicting you won’t want to quit.
– Gameplay Video 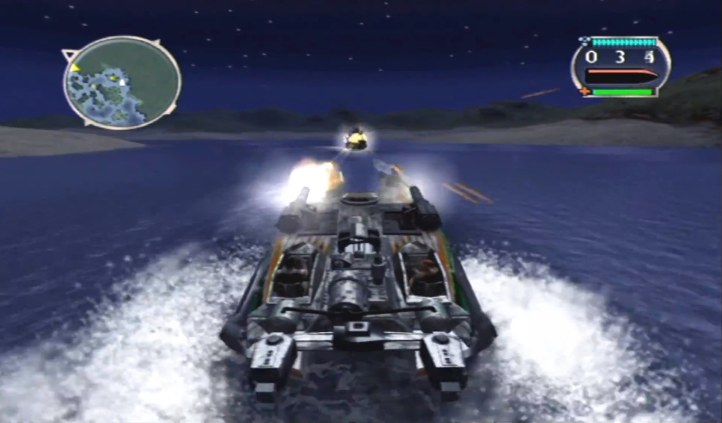 – See It On Amazon
Blood Wake was a launch title for the original Xbox. Technically Blood Wake is not a speed boat racing game, however, because of the many speed oriented missions and combat racing gameplay, I decided to add it to this top list. Blood Wake is a one of a kind game that revolves around boat combat and completing mission objectives. There is also a cool story behind everything. The story is presented art book style, with neat Japanese pirate characters in a sea setting. Many of your mission objectives include destroying bases and boats, helping out other boats in combat, collecting items, or making it to certain areas before enemy boats. The music is awesome with a lot of traditional Japanese rhythm tunes. There is plenty of boats to upgrade and unlock. For the cons of Blood Wake, some missions are extremely challenging and backing boats up is not an easy task in tight areas or when you’re surrounded by enemies. There is also up to four players vs combat gameplay. If you own an original Xbox this is a must play if you are looking for a great speedboat racer/combat game.
– Gameplay Video 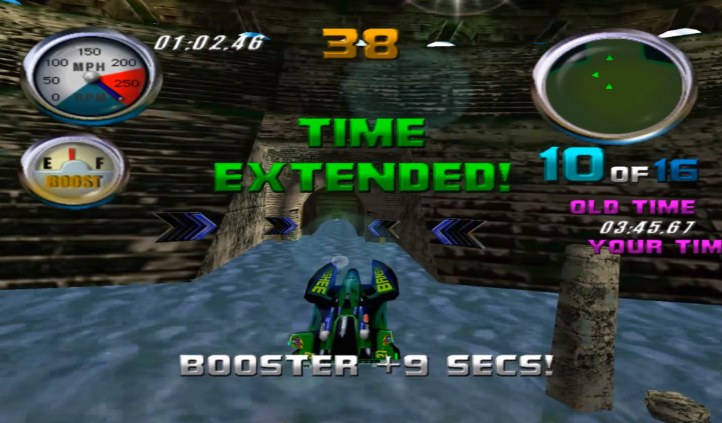 – See It On Amazon
Hydro Thunder was ported to various console platforms back in the early 2000’s. However, the original arcade version is the best, followed by the SEGA Dreamcast and the PC version. I don’t recommend playing other ports of Hydro Thunder (PS1, N64, Midway Treasures 3 versions) because there graphics and gameplay are terrible when compared to the original arcade version. What I love most about Hydro Thunder is the crazy track designs, insane drop off jumps, the boosts, and the entertaining announcer. Hydro Thunder starts off easy enough with only 3 speedboats to choose from, and 3 easy mode tracks to conquer. As you progress by winning races, more boats and harder tracks will become available to select. The tracks are all varied well, with a lot of exciting set pieces and amazing jaw-dropping jumps. Even though Hydro Thunder is an older game it has aged pretty well and is still fun to play.
– Gameplay Video 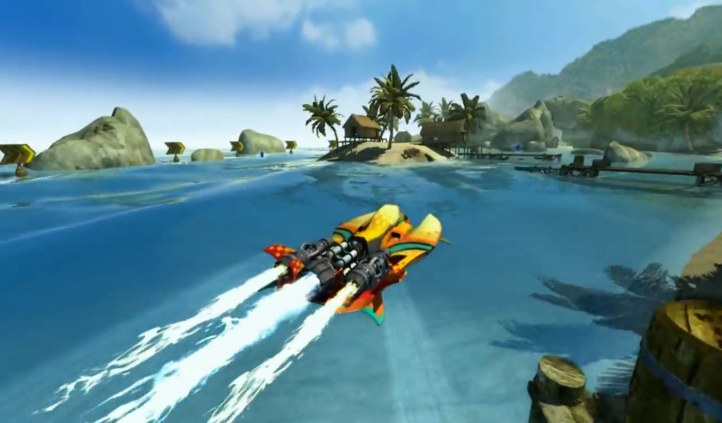 – See It On Amazon (If not available check Xbox Marketplace)
When comparing Hydro Thunder Hurricane to the original Hydro Thunder it’s a little debatable when trying to decide which one is better. The announcer in Hurricane is not as exciting as the original, and I think the tracks designs are a bit better in the original. On the other hand, the set pieces, multiplayer races, upgradable boats, controls, sense of speed, and graphics are much improved in Hurricane. Playing alone is fun but if you have friends to play with locally it’s even more fun. There are only 8 tracks available to race through, but each track is packed with alternate racing areas, along with memorable set pieces including giant monsters, fish, or huge drop offs. Playing it with 4 players in split screen is a blast. I am happy this game is available on Xbox one as a backward compatible Xbox 360 title. It’s nice to play this classic every once in a while!
– Gameplay Video 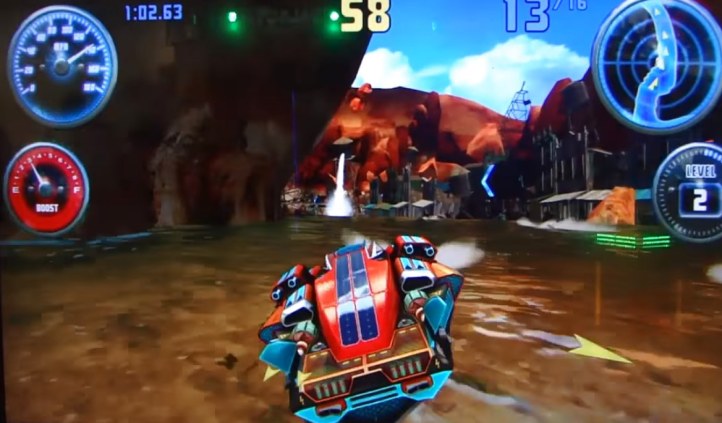 – Play It At Arcades
H2Overdrive is not officially part of the Hydro Thunder series. However, this is the spiritual successor to the series. This is the best Hydro Thunder game so far, only its name is H2Overdrive :/. H2Overdrive is an arcade exclusive that I hoped would have been ported to Xbox 360, but that never happened. Then I hoped H2Overdrive would have been ported to PS4 or Xbox One, but that also looks like it’s not going to happen. It’s a real shame that a speedboat racer this good is stuck in the arcades. From a graphical, level design, sound, and gameplay perspective H2Overdrive is far superior to any other speedboat racer. Now instead of just collecting boxes for boosts, you can crash into other boats or set down mines for an extra boost. The controls are great, and you got to love the special boost handle. You can also upgrade your boats and save your progress with a special code, so If you leave the arcade and come back another day your progress will be ready to load up. This game is pure speed, with no brakes, and a lot of excitement at every corner. This is by far the best speedboat game ever made so far! I am still hoping for a console port someday. I might have to start bugging the publishers/developers soon :D.
– Gameplay Video

The following games barely missed our top list. You might want to check these games out also.

Driver Speedboat Paradise (Android & IOS) -Besides the cash grab name that has nothing to do with the original Driver Game series. Driver Speedboat Paradise is one of the better speedboat racer games available on android or IOS. There is 6 gameplay modes to choose from, great graphics, 10 tracks from around the world to unlock, and over 20 boats to unlock and upgrade. The tracks are full of boosts and ramps you can perform tricks off of. The game has been pulled off of Google Play and Apple marketplace for unknown reasons. However, you can still find the game available for download on other websites by searching on Google.

Eliminator Boat Duel (NES) – A good classic boat racer that has different views depending on what level you are racing at. It’s not as good as Cobra Triangle but it’s still a solid game.

Speedboat Attack (PC) – A classic PC speedboat racing game for Windows 98. It was generic and cheesy but still pretty fun.